A very night vision ghost story - the tale of Gen4.
I know this is an old story and has many tellings around the digital campfire, but for the sake of new people who come along, I thought I might give it a good shot and let others pull out the marshmallows and roast them over some virtual C4 while calling me down on some details or adding their own versions.

Perhaps the most controversial topic still is Generation 4. A source of rumor and myth, it haunts the internet chatrooms even today, spoken of in hushed tones of awe by those not wishing to look uninformed of such matters. Some say the technology never existed. Some say it was killed by a  vicious rival,  murdered over the love of a woman... er... Military contract. But what is the truth? If someone did such a foul deed then who killed the Gen4 and what did they do with the body? What are all those Gen4 tubes floating around the Internet?

This, my friends, is a dark and deathly tale of a technology ahead of it's time. A tale that begins with a new concept called "Negative Electron Affinity" (=NEA) and the holy grail of image intensifier technology.

Things might have stayed that way forever, except that way back, when the Internet was just a wicked gleam in Vint Cerf's eye and Saddam Hussein was a hero to the people of the United States, there were two men named Scheer and van Laar who in 1965 discovered a really efficient photocathode could be made from a material made out of Gallium Arsenide. This material didn't hold on to it's photoelectrons like all other photocathodes of the time but actively rejected them, making it very useful. This was the first Negative Electron Affinity photocathode and the conception of Gen3 technology.

By 1976, BR Holeman, PC Conder and JD Skingsly had produced the first GaAs based image tube - the first true Gen3 image tube. Well, almost. It  didn't have a Microchannel Plate (MCP) and it had the incredible ( by "then" standards ) sensitivity of around 300 to 400 uA/lm in the lab!

After that, more Gen3 experiments occured, but the problem was that Gallium Arsenide, as great as it was, had an achilles heel. Positive ions generated within the MCP would quickly poison the photocathode and in real-world use, it only lasted a few hundred hours, compared to a few thousand for the much hardier Gen2 photocathodes.

The solution was to place a thin film ( about 30 angstrom or 3nm thick ) of Aluminium-Oxide ( AlO ) over the MCP where the positive ions were generated to keep them all in. The film was thin enough to be penetrated by high energy electrons, but the positive ions were much larger and had  little kinetic energy and were trapped by the film.

This worked exceptionally well and gave Gen3 the capability to have a service life of thousands of hours ( typically more than 5000 hours compared to 2000 of the Gen2 of the era ) as well as being much more sensitive. As a result, the new technology gave the US the edge over other countries and nearly all image tubes for the military were manufactured in Gen3  from the late 80's onwards. Everyone was happy and the whole US military rejoiced.

Well, maybe not everyone. Some scientists who developed night vision technology really didn't like the film at all. Even though it let electrons through, it stopped some. This is known as "Dead Voltage". You see, electrons are like bullets and the AlO Ion Barrier Film was like a bullet proof shield. After all, it had to stop the positive ions so it was fairly solid! AlO is, afterall, what rubies and saphires are made of. It's solid and dense stuff!.  And any bullets that didn't have a speed of more than about 150 Electron Volts ( 150EV ) well, they didn't have the speed to penetrate and would get caught in the webbing. After all, the film was VERY thin, but electrons are TINY by comparison. And guess how many electrons had less than 150EV and got stuck in the ion barrier film? About HALF. Yep, 50%. As a result, a Gen3 tube with a sensitivity of around 1000 uA/lm wasn't really any better than a Gen2 tube with a sensitivity of around 500 uA/lm and Gen2 photocathodes were getting better!

On top of this, the loss of signal led to lower signal to noise ratio levels than a GaAs photocathode should cause. It was like taking a sprinter and chopping one of his legs off at the start of the race. The solution crippled the benefits of a NEA tube altogether.

The solution then was to create a filmless tube. One that didn't require the AlO tube ( like the Gen2 of old ) yet that lasted more than a few hundred hours. By this time, the military needed tubes that lasted upwards 10,000 hours. 200 hours simply wasn't going to cut it.

Then, a clever group of engineers at Litton worked out that the trick wasn't to stop the positive ions, it was to get rid of them altogether. Through a series of clever steps involving careful scrubbing of the tube and MCP, they managed to get the positive ion count down low enough in a design and worked out how to make an autogating power supply that healed the damage caused by what few positive ions were created in the MCP. This new technology was so effective that it didn't need a film at all. Litton showed the military and the military was impressed. These new "supertubes" were like the sprinter with BOTH legs. Powerful and impressive, they gave a new level of performance and as a result, they were recognized as the fourth generation of night vision.

And how did it perform? Here's the difference with it's competitors at the time. 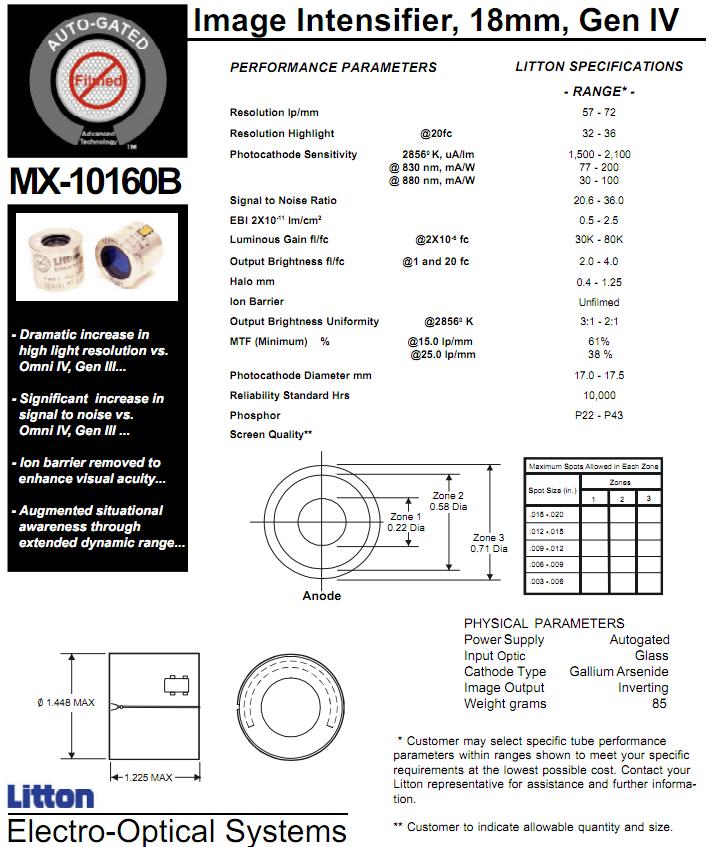 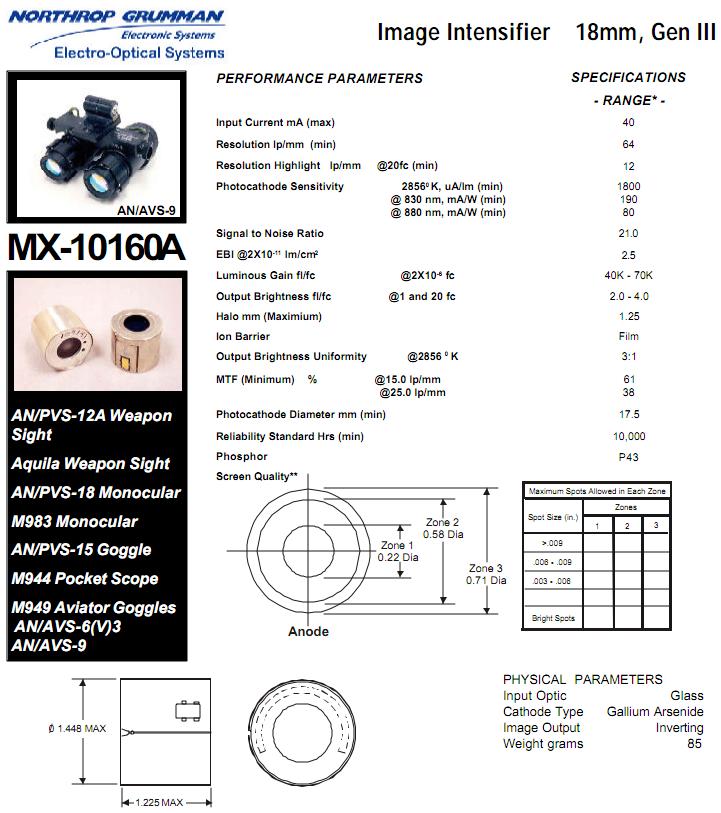 Remember that although the photocathode sensitivities are around the same, the Gen IV has double the effective sensitivity, so at 2100 uA/lm it compares to a Gen3 at 4200 uA/lm.

Now here is where the story gets a little dark and took an unforeseen turn. No-one really seems certain what happened next, but there have been many clues. Here's my take on the events that followed based on what I've learned from talking to various people over the years.

A company called ITT that made most of the image tubes for the US military never saw this new technology coming and basically couldn't make it work. They lost market share and got worried. They had never faced such an impressive performer before and they simply couldn't match the quality of the tubes that Litton was making.  This much is somewhat known as ITT have given their side of this story. You can read about it here: http://www.nightvision.com/products/military/case_study-gen3.htm

And Litton perhaps pushed their new tube into production a little too quickly. As impressive as it was, it had a rather severe flaw. It was fragile. No one had ever built such an impressive tube before and no one knew what to expect. Under weapons use, the MCP would smash into the Photocathode and damage the tube! This sprinter had both legs, but if the track was uneven or he fell, he would break both of them and fail to finish the race. Not to mention it was difficult to build. The complicated process reduced yields and it was

This kind of worried the military ( A night vision device that fails in combat ! ) and ITT had a backup plan. They developed a tube called "Thin Film". By working out how to make the ion barrier film thinner than the original Gen3 film, say about 10 anstrom ( 1 nm ) they could get the dead voltage down to about 50v and most of the electrons would pass through. These new tubes had very high signal-to-noise ratio and best of all, would take the recoil of a weapon. So the army bought a lot of these thin-filmed tubes and they kind of worked OK. The sprinter still had both legs and as long as you ignored that one foot was still missing, everything was just fine...

So the army went with thin-film and the Gen4 tubes slowly went the way of the dodo until they became extinct. Everyone pretended that one-footed sprinters were the way to go and that was the end of it. The Army even pretended it never called filmless Gen4 and the new standard became Gen3 Omni VII Thin Filmed. The Gen4 tube was never to be seen again...

The Filmless tube, AKA Gen4, was the mx10160B. For those who have wisdom ( and access to fbo.gov ) you will sometimes find that orders for the  mx10160B are still made. Yes, for aviation and special forces purposes, they still make filmless tubes and they still sell them to the US. Perhaps they even withstand recoil now, but they will never again see the greatness they once knew. This sprinter, still the fastest in the land, is in disgrace and no one will watch him run anymore...

So the fourth generation of image intensifier really did exist my friend and still exists today, though few see it's shining photocathode or high resolution MCP in action.

And even to this day, some say that if you listen closely when the wind blows and the moon is absent from the night sky, you can still here the faint whine of it's autogated power supply haunting Omni VII. Howling out it's pain for it's lost love.. er, military contract.
[ Login ] [ PERSONAL MESSAGE ] [ HELP ]
Logged in as:guest: 1:guest ** :./data/gen4
Comments:
No comments presently. End of page.